Synthetic phonics refers to an approach to the teaching of reading in which the phonemes [sounds] associated with particular graphemes [letters] are pronounced in isolation and blended together (synthesised). For example, children are taught to take a single-syllable word such as cat apart into its three letters, pronounce a phoneme for each letter in turn /k, æ, t/, and blend the phonemes together to form a word. Synthetic phonics for writing reverses the sequence: children are taught to say the word they wish to write, segment it into its phonemes and say them in turn, for example /d, ɔ, g/, and write a grapheme for each phoneme in turn to produce the written word, dog.’ Definition adopted by the Rose Report

•When sounds are blended together to read words

•When words are broken down into sounds to segment for spelling

The children are taught in small groups organised by their Phonic phase.

They are assessed informally throughout the year to ensure they are secure in their phase before moving on.

Supports the importance of speaking and listening and develops children’s discrimination of sounds, including letter sounds.

The children learn to pronounce the sounds themselves in response to letters, before blending them. This leads to them being able to read simple words and captions.

Completes the teaching of the alphabet and moves on to sounds represented by more than one letter. The children will learn letter names and how to read and spell some tricky words.

The children broaden their knowledge of sounds for use in reading and spelling. They will begin to build word-specific knowledge of the spellings of words. 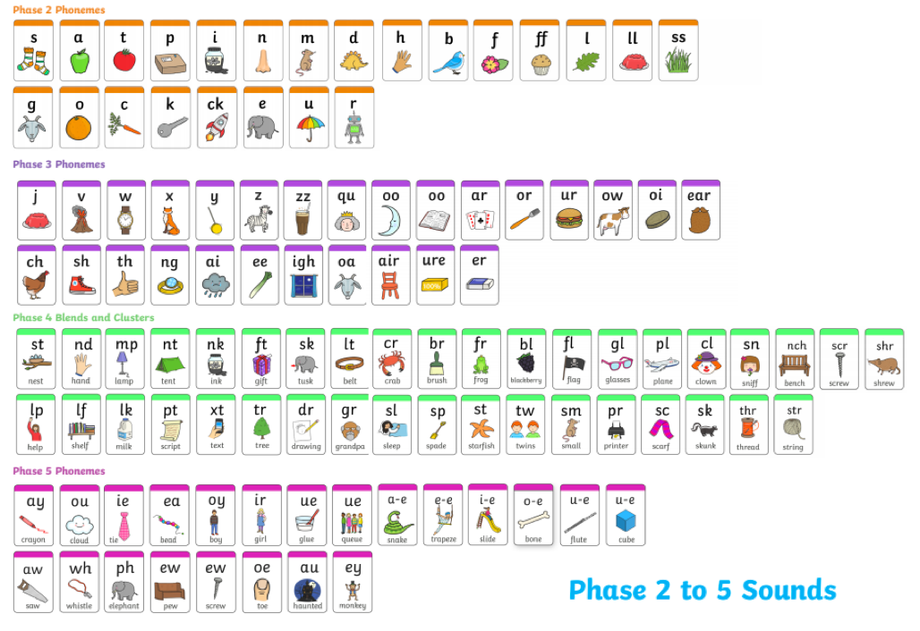 What is the Phonics Screening Check?

All children in Year 1 will be take part in a Phonics Screening Check in June.

The check is designed to confirm whether individual children can decode and blend to a standard set by the government.

It is mainly used for us as a school to ensure we have a clear understanding of what the children need to learn in Year 2.

What will happen during the check?

The check will be conducted 1:1 with each child and a familiar adult.

The assessment will take approximately 10 minutes per child, but this is only a guideline.

The nonsense words in the check have an alien next to them so we often call them alien words.

The reason they are included is because they are new to all pupils; they do not favour children with a good vocabulary or visual memory.

It is important to remember that this text is literally just to assess the children’s ability to segment and blend sounds. It does not assess their understanding. 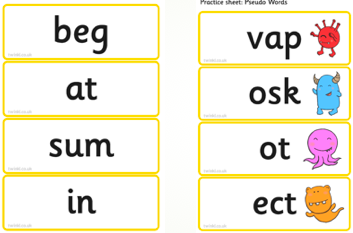 How can I help my child?

•Read as much as possible

Unfortunately not the ones with chocolate chips.

Some cookies are necessary in order to make this website function correctly. These are set by default and whilst you can block or delete them by changing your browser settings, some functionality such as being able to log in to the website will not work if you do this. The necessary cookies set on this website are as follows:

Cookies that are not necessary to make the website work, but which enable additional functionality, can also be set. By default these cookies are disabled, but you can choose to enable them below: